QTZ to the rescue

First of all, a few words about this blog. This has been my development blog for years but it's also been left alone for years now. So yes, I decided to use it as a base for the new blog that will be the home of Gourmet Carmageddon (and the vanilla C2 Mini-Pack). Changed the design a bit and tried to come up with something similar to a logo. I added download links for the current Meld Pack which Gourmet will replace. Also the Mini-Pack. Both the Meld Pack and the Mini-Pack will be updated in the upcoming weeks.

So, the Meld Pack is quite old now, and its bugs were never fixed directly in the installer. Nor does it include recent tools to enhance the game on modern systems (it actually saw two generations of tools pass by).  QTZ finally started releasing patches for the Meld Pack (as he did for the original Carma releases and Mastro's C1 SE Pack). Current patch adresses most common issues found with the pack as well as his usual tiding-up things. Details can be found in this thread at CWA: cwaboard.co.uk/viewtopic.php?p=103906. Once the main patch will be done, it will be incorporated into the main Meld Pack and that will be the first and only update to the pack before Gourmet Carmageddon. 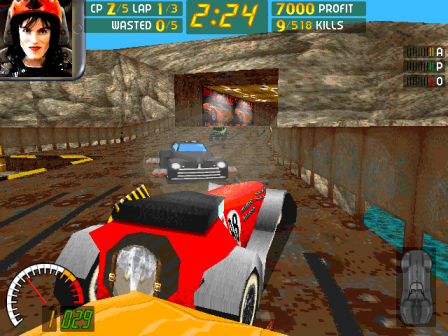 About the C2 Mini-Pack, a lot is going on at the moment and very interesting changes are coming. While it isn't a gargantuan task, I simply lack free time at all as of lately to really engage into progressing with the to-do list. Also a change which is part of the Mini-Pack process was integrated into the Steam/GOG C2 release: the Eagle 3 model was updated with a more high resolution compliant model I prepared last year. (along with original hires textures being part of the official release now).

Not much else to say at the moment, I just hope to get things started slowly but steadily.