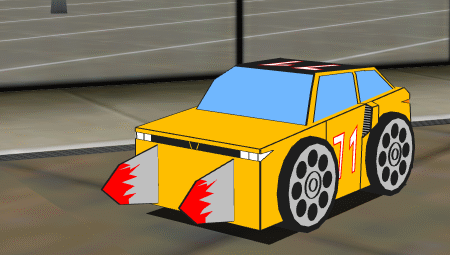 This blog will probably become more active. Seeing I post useless shit there clearly is no reason I post my useless shit elsewhere than here. I'll work on the integrity of the tosh server and with my usual projects. First thing: Crashocalypse is now hosted here as well. We still have to bring the actual files back, but I fixed the layout, the galleries and the dead links. An update of Digga is coming as well and then a small update to BBQ for the people enjoying PvP. I got new animations for boned peds working in C2. I guess it's just a matter of time till I get the skeleton animations working too. I'll probably release a chicken (the one from Zelda TP) as a test (it's already ingame though, I'm testing the bones limitations). And then if I'm lucky, the fucking biker I work on for at least 1 month now. I'll also bring back some short tuts I posted on CWA, in here. I should actually create a tutorial tag.

What you see up there is a picture depicting the Stiletto in "Choro Q" style (didn't know the term untill a few hours ago). It's been drawn by Agent_Orange from the Carmageddon Wikia. You can see the original drawing here. TTR suggested me to do it in MAX and I thought it'd be a good idea to test some more simpmats. The result is a mix of wireframe actor rendering mode and full lit materials for cars. The new full lit trick is very simple and I'll explain it later this week.

Euhm, so this is what it looks like in 3D ? Nice

Maybe you can do the other vehicles i've drawn ?

Hello! Yes this is 3D, using very special C2 features.
I have no plan making any other of your creations in 3D atm, but I might at some time maybe :B
TBH it was just a little challenge TTR dared me, plus it was a very good example to test the features I explained in the article.
The Heavy Impaler would be a good one too heh

Or try this one ?